Recovinyl: A Best Practice for the circular economy

In Italy an ICESP platform has been developed, coordinated by ENEA and an integral part of the similar ECESP European platform, which aims to make known all the best best Practices Available for the development of a Circular Economy.

The PVC Forum Italy wanted to contribute to the development of this platform by making available information on how Recovinyl, the European and National Organization, created in 2003 by the PVC industry to facilitate the collection and recycling of PVC waste within the Voluntary Commitment of the European PVC industry.  In particular, Recovinyl wants to stimulate, promote and certify the use of 800,000 tonnes of recycled PVC by 2020. More information is available on the website www.recovinyl.com.

in Italy Recovinyl has played and is playing the role of promoter of PVC recycling and over the years has been consolidated, gradually integrating the various initiatives of collection and recycling previously managed by Transformers with specific projects Sector.

Today Recovinyl Italia is not only limited to ensuring that the volumes of PVC recycled every year increase. Its mission extends to optimising the efficiency of the resources put into the field by the PVC industry by mediating recyclers and processors to establish a reliable relationship and a flow of materials based on a certification system of Recycled PVC material.

As in other European Countries, Recovinyl’s strategy in Italy is to consolidate and increase a steady supply of post-consumer and post-industrial PVC waste to be recycled, creating an application for recycled PVC material from By the processing industry.

The following diagram shows the quantity of recycled PVC certified in Italy through Recovinyl: 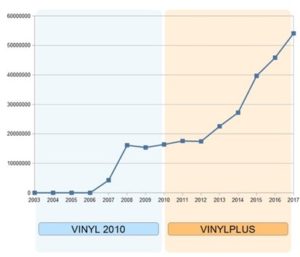 Recovinyl will continue to give strong support for VinylPlus and PVC Forum Italia for the achievement of ever greater quantities of recycled PVC in the coming years in Italy in order to give a further and ever stronger contribution to achieving the objectives 2025 equal to 900,000 tonnes of recycled PVC.