On July 4, 2019, at the headquarters of the Metropolitan City of Venice, the final data of the WREP project’s trial in Italy were presented with the participation of all local corporate and institutional stakeholders involved initiative.

In 2016 PVC Forum Italia and VinylPlus began a joint three-year project called WREP(WasteRecycling Project)with the aim of defining the quantities of PVCs available for recycling in Italy and create a pilot  scheme to improve the collection and recycling of PVC waste.
The following year,WREP 2017,ThePVC Forum Italia has also found interest, including from the relevant authorities, in the implementation of a PVC waste management system that would facilitate the meeting between demand from PVC recyclers and supply from PVC waste, particularly from construction and demolition. In the third year, thanks to the

positive feedback obtained in previous years, the WREP 2018 Project was born with the aim of involving, in addition to the relevant authorities, the different stakeholders belonging to the demolition and recycling industries. The aim of the project is to
implement a pilottrial aimed at detecting, intercepting and recycling PVC in a specific test area, the territoryof the citMetropolitanVenice.And, more generally,increasequantity and quality of PVC recycled in Italy with a circular economy perspective,through the involvement of:

How to achieve the goal?

The PVC Forum Italia has provided support to activities to increase the amount of recycled PVC in Italy, thus making an effective contribution to the goal of VinylPlus, project partner, to reach the share of PVC  800,000 tonnes per year by 2020.

The Italian PVC market in 2017, so divided by application sectors, haspresented the starting point of theproject:

Linear economics is generally defined as a model within which the product develops as the main source of value for companies. As a result, profit margins are derived from the spread between the final sale price on the market and the costs required to sustain production. The theory of linear economics contrasts with the so-called
circular economymodel,in which products become one of the many ingredients of an integrated development model, which focuses on the sale of a service . In this case the business focuses on creating added value that is formed when you accompany a product with a service, rather than with pure sales.

In September 2018 the trial officiallystartedin the territory of the city Metropolitan of Venice, in which the Eco-Ricicli Veritas Group consolidated over time a waste tracking system.

Through their involvement, PVC from:

For PVC flows from the countries, it was necessary to define:

For PVC flows from the constructionand emolytion flows, it was necessary to define:

DaE S.r.l was involved in the recycling phase, as an Italian representative of Recovinyl (the European organisation created in 2003 by the PVC industry to stimulate and certify the use of recycled PVC).), has given and will contribute in the future to:

Previously, at giugno 2018, the training activitystarted, a key step of the WREP 2018 project.
SBased on the educational material prepared by AEDas Ltd, were trained by the PVC Forum Italysupply chain operatorsinvolved in the trialfor the purposeOfensure thatmorequality of the recovered PVC. The training took place through classroom and field training sessions, and all the information was given to recognize, elect and manage PVC materials. The training was specifically aimed at two categories of workers: the staff of the Eco-Veritas and Eco-Ricicli Veritas centres for urban waste and the perilofationof companies in the supply chain and obstruction and hemolytion. 41 workers were involved between collection centre managers anddemolitionwaste managers over seven training days.

These recycled volumes come from a single “test area”. By extending the initiative, you can get to large amounts of recycled PVC.
In 2019/2020 there are already agreements in place to replicate the projectin other provinces of the NordI with the cooperation of their waste recovery companies. 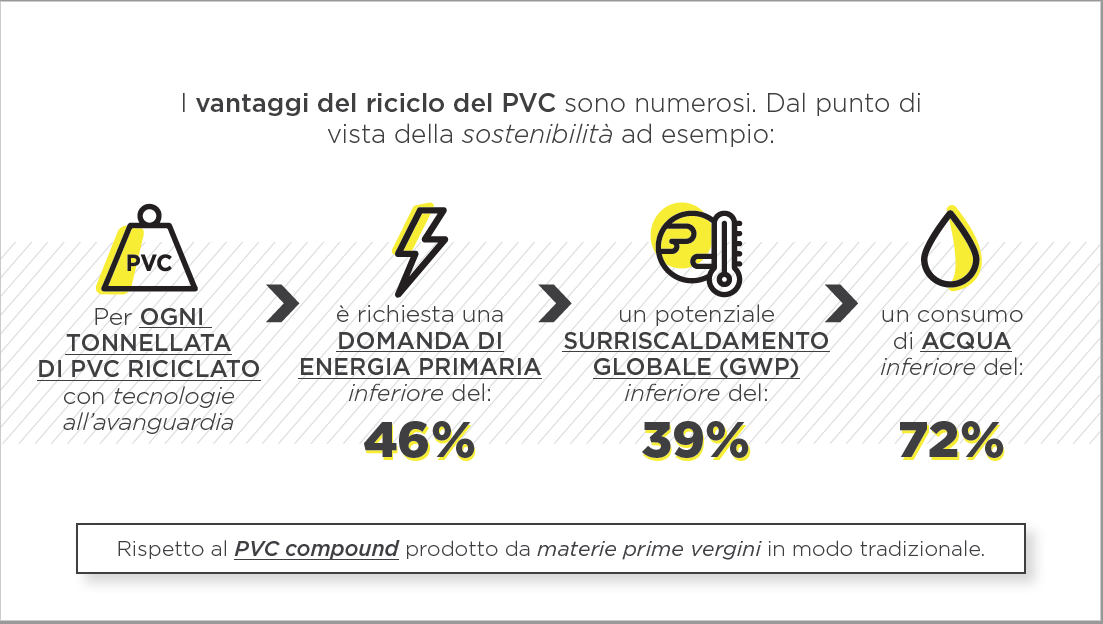 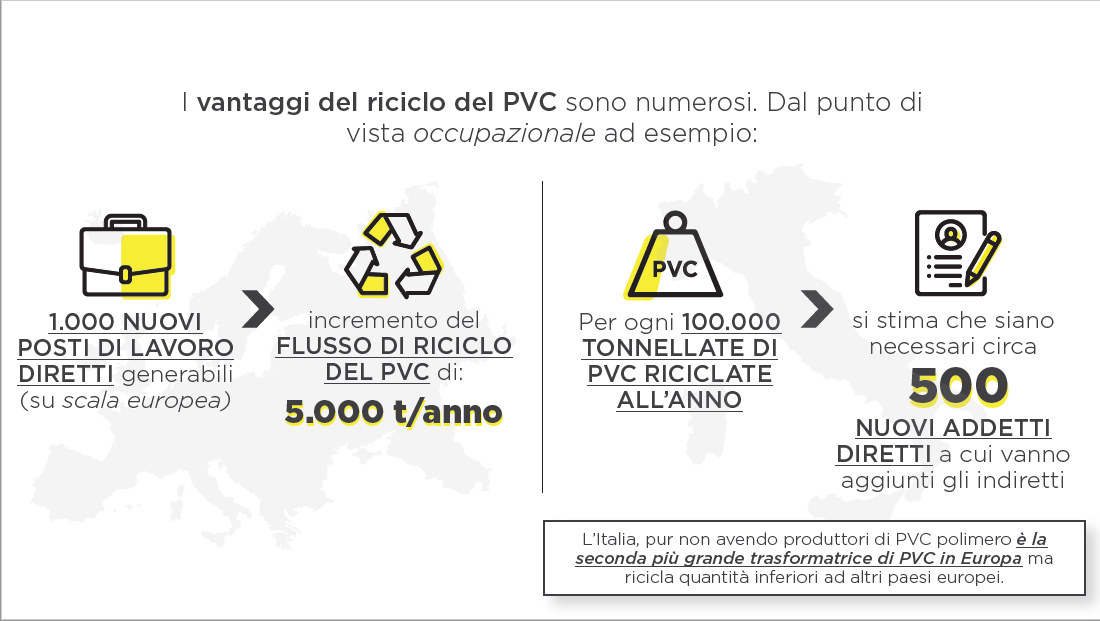 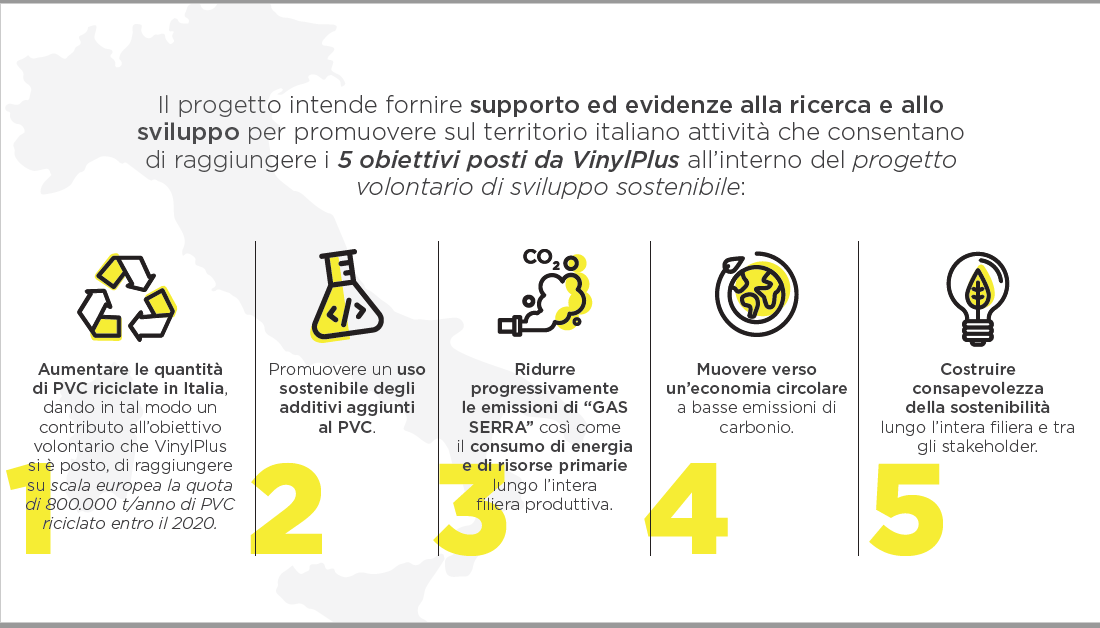 VinylPlus® (www.vinylplus.eu)is the Voluntary Commitment of the European PVC Industry. The programme sets out a long-term sustainable development model for the PVC industry by addressing a number of key challenges in Europe of 28, Norway and Switzerland.